​
GREAT NEWS! My Haunted House was purchased to be in spec commercial!

I am very proud to announce a Producer and Director from the AMERICAN FILM INSTITUTE in Hollywood, purchased my HAUNTED HOUSE to appear in a spec commercial for KLEENEX TISSUES. I also created the background for the film. "The Boogey Man" spec commercial is a creepy storybook fairy tale warning children of the consequences of not using a tissue for their nose.

I plan to create twelve (12) "Boogey Man" dioramas that will be like the one purchased by the AMERICAN FILM INSTITUTE. They will be signed and numbered, thus Limited Editions.  They will be offered for sale as they are created and completed. It is likely this national recognition will influence the value of these Limited Edition dioramas as well as your previously purchased dioramas.
​
Diorama #1 will remain in my personal collection.  BOOGEY MANY diorama #4 is SOLD.

DETAILS: Fenced Cemetery with Tombstones, LED Light, Stone Steps, Outstanding Landscaping with Rocks, Natural Sands, Weeds, Bushes, & Grass Turf, Tar Paper Roof w/ Chimney, Clear Acrylic Windowpanes, Curtains, Shutters, Hardwood Base, etc.  The Trees are not included; they are part of the background.
LIGHTING: The BOOGEY MAN HOUSE has an interior LED LIGHT. The manufacturer of the Light Kit advertises it will last 100,000 hours. Since I cannot personally guarantee this light kit, which can be finicky, I am including it in the house FREE.  The battery and on/off switch are located underneath the base.
SIZE: Approximately 8 1/4 inches by 7 1/4 inches, and it is 7 inches tall to the top of the chimney.
SCALE: HO 1:87
SIGNED: D.A. Clayton, dated, and numbered
​
​     To see MORE PHOTOS of the "Boogey Man" Diorama,  CLICK HERE!

I'm in the process of building BOOGEY MAN HOUSE #5. 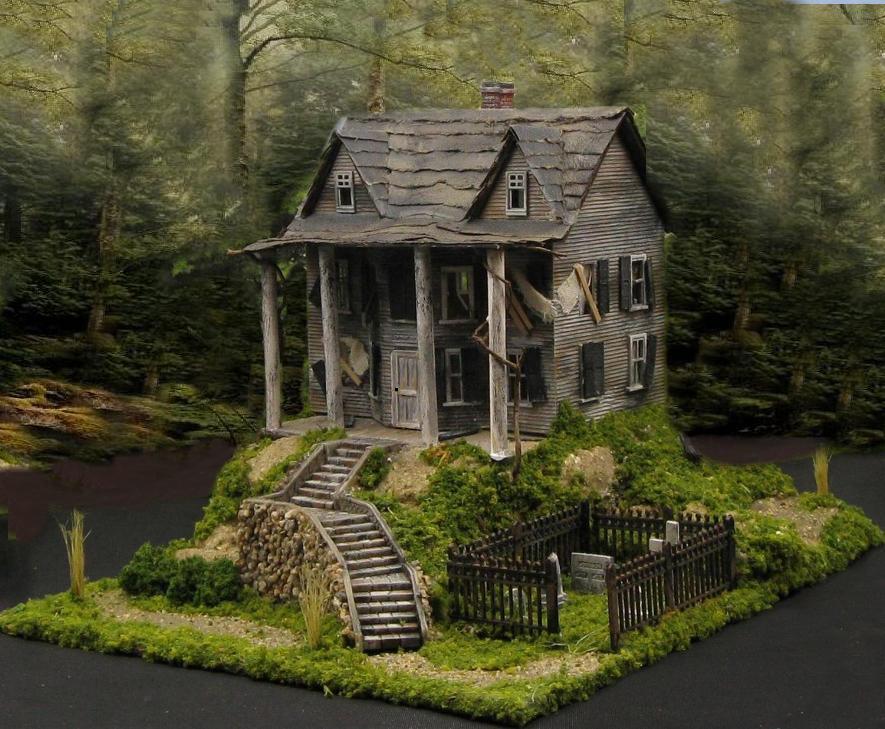 Below are a few photos of my diorama being filmed for THE BOOGEY MAN.